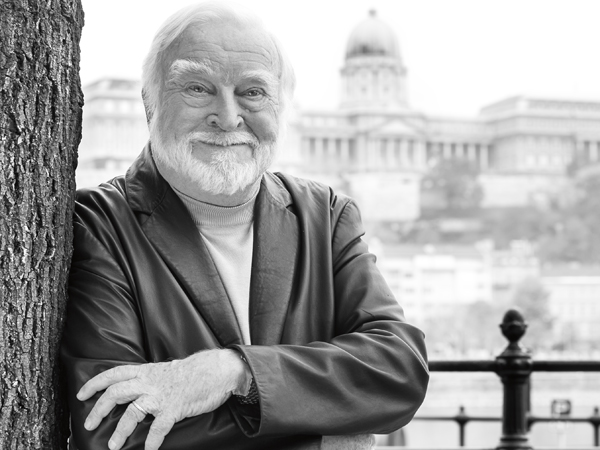 Mihály Csíkszentmihályi passed away on Wednesday, October the 20th, 2021. As reported by online news based on family and institutional sources, he was surrounded by his family in his Claremont home (California, USA), with his wife of 60 years, Isabella, at his bedside. He is survived by their two sons, Mark and Christopher, with their respective two partners, and six grandchildren.

After his first major academic period at the University of Chicago, he spent his last academic decades at Claremont Graduate University (CGU). CGU announced such sad news by reporting detailed information about his academic and personal life:

At CGU he co-directed, together with Jeanne Nakamura, the Quality of Life Research Centre:

His TED lecture on Flow and happiness hits over 6.6 million views:

These above are just a few proofs of Mihály’s stellar calibre in psychology, and in the larger global society, as well as fade hints to his amiable truly cosmopolitan nature which was possible to experience whenever meeting him. But there is a feature of his endless curiosity and intellectual passion which has certainly been overlooked: his interests in the people-environment interface. Michele – as he was also named by the numerous Italian colleagues and collaborators he always had especially in Rome and Milan and other places – in the last years of his life was increasingly interested in environmental issues, reviving and bringing back to the surface something that I think was always important for him. This has not been adequately represented in his formal production; or, better, it is implicit in his greatest contributions and it has been cultivated by him like a “karst river” (i.e., a topography and geomorphological phenomena from his geographical birth area referring to underground rivers appearing and disappearing from the Earth surface). I would like, here, to pay a different tribute to his memory from those that are reported all over the world with reference to his two masterpieces, namely the Theory of Flow, and the Positive Psychology paradigm and movement. It is a minor story, perhaps, but a significant one, telling us that a giant of XX Century psychology had a people-environment interest at his core, on my opinion.

This is not the place to extensively treat such an issue: I just want to stress it with regard to his two major contributions in the history of psychology. The first one is that the Theory of Flow is built on the balance among person and the environment: when human “skills” match, and are balanced with, environmental “challenges”, then the person has the “optimal experience” (i.e., “Flow”, which grants a number of positive psychological consequences). Whenever one of the two sides (namely, the person and the environment) overcomes the other one, or it simply lacks, less positive or negative psychological outcomes arise. I would simply consider this as the psychological counterpart of an ecologically balanced view (in metaphorical and literal terms as well), where the person and the environment need to be balanced in order for the most positive outcomes to happen, preventing and avoiding the worst results.

The second one is that “Positive Psychology” deals with the constructive way out for the human-environmental system from any kind of situation: whenever a human-environment clash happens, and catastrophes or disasters arise for either one or the other terms – or most probably for both of them – there are ways of perceiving, conceptualising and coping with all of that which represent opportunities to reach even better states of equilibrium, strengthening both terms together (both people and the environment). The human-environmental system becomes thus resilient.

On several occasions, during the last decade – from 2012 onwards when I had the honour of collaborating with him and the lucky to spend time meeting him in Italy and in the US within several academic and mundane contexts – I realised how he was explicitly considering environmental issues, being motivated towards environmental psychology. He invited me as a keynote speaker at the 3rd World Congress of the International Positive Psychology Association in Los Angeles (2013), with the aim of raising the attention towards such issues and exploring new scientific avenues for the psychological endeavour at the cross-road between positive and environmental psychology. We also managed to collaborate over research (published in 2016) focusing on the links among, on the one side, Flow experience while carrying out significant activities in a specific place, and, on the other side, the strength of a person’s specific place identity. I consider these shared scientific experiences with Michele to be seeds, rather than fruits, as I think his intention and design was to stimulate the growth of a systematic approach capable to exploit the full potential of positive psychology together with environmental psychology, for the pursuit of sustainability, health, and happiness of the human-environmental system. We had many conversations together, often at lunch or dinner either in Rome or in other wonderful Italian locations where he loved to spend time, typically in Summertime; as well as at his Claremont home, with her wife Isabelle, and colleagues and collaborators. His intellectual and personal involvement over environmental issues in their psychological interface was core for him (regarding architectural and urban issues, as well as energy abuses and biodiversity depletion too).

This may appear as a result of the Zeitgeist, as it partly could be, probably, given Michele’s sensitivity and openness. But it also brings back to his both personal and scientific past. He had a somehow adventurous life across countries, in the turmoil of historical and cultural changes, which repeatedly turned upside-down his living conditions and granted him the necessary experiences to learn the importance of the psychological interplay among a person and her/his contexts. But he also undertook the scientific study of the person’s domestic environment relevance for her/his own self, in his co-authored book “The Meaning of Things. Domestic Symbols and the Self” (1981). My father Paolo Bonaiuto is a colleague of him and they get along very well, also for the Italian publication of that book (1986) edited by my father, who introduced him to me when I was a 21-year old undergraduate in psychology: we visited Michele and his family during their stay at a countryside house on the seaside near Capalbio (Tuscany, Italy, Summertime 1984). I still remember many details of that lovely encounter with Michele and his family in an enchanting place: at that time, I did not know he would have resurfaced almost three decades later, right like a flowing karstic river.

Since ever, his Italian – given his birthplace and his youth, and the time he liked to repeatedly spend back in Italy when adult – was linguistically excellent, being equally complemented by adequate knowledge of the corresponding culture; as it was the case for other languages and cultural areas he belonged to and he mastered too. Simplicity and sophistication were both at home in him. From an anecdote I heard ages ago from my father, according to someone, his only limit was in his surname: apparently, someone once said that Mihály Csíkszentmihályi’s fame would have been even much greater if only his surname would have been easier to read, pronounce, and remember. Currently, probably not a politically correct joke. I think that after all the response to all this would simply lie in his smile, and in the smiles of the people who knew him, listened to him, chatted with him, and read him. His life lasted 87 years, his legacy is incommensurable.