THE EARLY DAYS OF ARCHITECTURAL PSYCHOLOGY IN THE UNITED KINGDOM 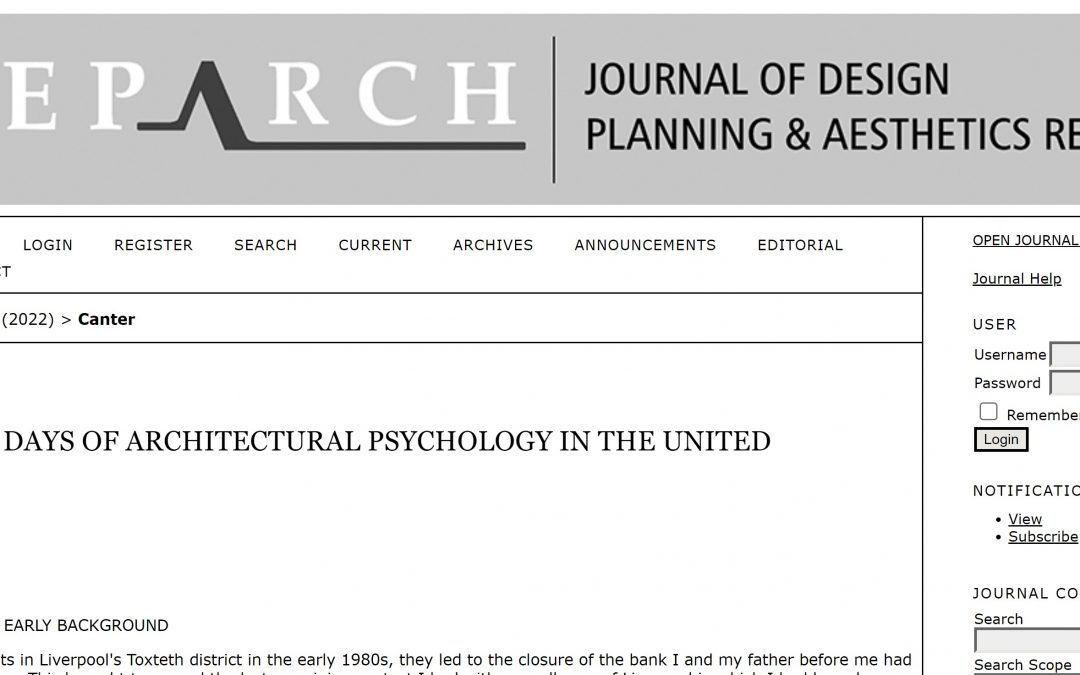 Professor David Canter just gave us a fantastic legacy with his article that has just been published:

Abstract: When there were riots in Liverpool’s Toxteth district in the early 1980s, they led to the closure of the bank I and my father before me had used for over 30 years. This brought to an end the last remaining contact I had with a small area of Liverpool in which I had been born on January 5, 1944, where I had gone to the Hebrew Primary School and the Collegiate Grammar school. The same square mile also housed Liverpool University, where I had obtained my undergraduate degree in psychology in 1964 and my doctorate in 1968.

Like many Jews in Liverpool, my father had arrived there around the time of World War I, escaping from the pogroms in Lithuania, with every intention of going on to the United States. His painful life, including the murder of all his close relatives by the Nazis, culminated in his marrying my mother who had been born in Liverpool, but whose father had come from Russia. My Liverpudlian roots being so shallow, it is not surprising that in 1966, I took the opportunity to join the Psychology department at Strathclyde University, in Glasgow, and the year after to move to the School of Architecture in the same university, as a member of the Building Performance Research Unit.

In Glasgow, I was joined by Sandra, who had been doing psychology with me at Liverpool (she did rather more than I did because I spent so much time in the university dramatic society). Sandra had completed an outstanding MSc in clinical psychology at Queens University in Ontario before coming to Glasgow. She went on to do a PhD at Glasgow University on schizophrenic thought disorder, while working as a clinical psychologist. Over a 10-year period, she developed her career as a clinical psychologist as well as giving birth to our three children. Our first child, Hana, was just 6 months old when we went to Japan in 1970 on a Leverhulme Fellowship. On our return we spent a year in Glasgow, where Daniel was born. Then we moved to Guildford, where I took up a lectureship in the psychology department at Surrey University in 1972. We managed a sabbatical at the University of California-Berkeley in 1980 a few months after Lily was born, which makes her virtually the same age as the Journal of Environmental Psychology, which Ken Craik and I got moving while I was on sabbatical.

The lack of movement in the British university system kept me in Surrey for as long as I lived in Liverpool, being appointed as a Professor of Psychology and then Head of the Department in 1988. Being less than one-hour’s journey from the centre of London undoubtedly contributed to the very many research opportunities I had whilst living in Surrey, from government departments, industry, commerce, charitable bodies, and research councils.

I enjoyed horse riding, and in the 1980’s started to learn the clarinet. I even had an exhibition of my collages in the University of Surrey gallery in 1988. Exposing myself to that kind of public scrutiny was a good preparation for writing the present chapter.